Three or four months ago, my patient husband and I made reservations at the Harraseeket Inn in Maine, so that we could celebrate the completion of the History of the Medieval World.

Well, the History of the Medieval World is still incomplete. I finally forced myself to admit that I wasn’t going to finish it by the end of the summer, no matter how hard I worked; the book has a sort of rhythm of its own, and it isn’t drawing to a close. I’ve got some more thinking to do. I HATE admitting that I can’t meet a deadline (and I already didn’t meet this one once; it was supposed to be finished in the spring), but admitting that I can’t muscle my way through to the end is preferable to turning in a bad book.

Or losing my mind.

How do you decide how long is an adequate time to write the history of the entire middle ages?

Anyway, we decided to go to Maine. I was in desperate need of a break, the reservations were made, our friends Mel and Justin were willing to babysit, and we had both cleared our schedules, which is not so easy when you either work or parent for 98% of your waking hours.

So here we are, in Maine; and although it would be lovely if the book were also done (more on this later), I’m already feeling the creative sections of my cerebral cortex–practically bashed into insensibility by the club-wielding thug in my brain who responds to each finished page by shouting, “Write faster!”–are beginning to struggle back to consciousness. It is (literally) twenty degrees cooler in southern Maine than in Virginia. We went for a long walk wearing SWEATERS. And then we had lobster (Pete) and clams (me) for dinner. 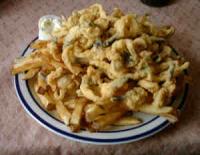 Seriously, clams in New England are like a DIFFERENT FOOD than clams at, say, Red Lobster in Williamsburg, Virginia. It’s like the difference between home grown and store tomatoes, or between Fuji apples shipped from Japan to the U.S. and Fuji apples grown in your own backyard.

Although I was born in New England (Massachusetts, thanks to my father’s time as a Navy doctor), I’m essentially a Virginian, and I don’t get lobster. Or crab, really. Lots of effort and mess, a little bit of fairly pleasant meat. But clams are something else. Once you’ve tasted the real thing, you can never go back to the Long John Silver version.