Exciting news! My Korean publisher, Theory & Praxis, has invited me to come to South Korea in November for a little bit of a publicity tour. Theory & Praxis, which has published the Korean edition of the Story of the World series from Peace Hill Press over the last few years, has also acquired the translation rights to the entire History of the World series from Norton. The History of the Ancient World will be out in September, and the publisher is setting up a couple of lectures as well as interviews for me. Also I’m going to get to see some of the historical sites I’m writing about as I work through medieval times.

Correction: which I will go BACK to writing about when my sabbatical is over.

(Gyeongju, the capital of the early medieval kingdom of Silla, which controlled most of the Korean peninsula between 700-900 or so)

I very much enjoy dealing with Theory & Praxis, which I primarily do through an incredibly gracious and helpful Korean literary agent in Seoul. In fact, this is the first time in fifteen years of professional writing that a publisher has offered to pay for me to take a publicity tour. Yep, only had to wait for my ninth book. Chew on THAT, all you aspiring writers.

Anyway, Theory & Praxis asked me to write a special foreword for the Korean edition, which I finally finished last week (it shouldn’t have taken me that long, but there’s something paralyzing about writing forewords). They also asked whether I could sign my name in Korean for inclusion at the end of the foreword.

My Korean handwriting is pretty elementary. In fact, my whole attempt to learn to READ Korean characters was greatly hampered by the fact that I tried reading it right to left for at least a month before I figured out that I was doing it wrong. (OK, I know that sounds stupid, but the strokes are so much like Hebrew that I didn’t even think about it–I just automatically started on the right side of the page and read back.)

After much practice and consultation with the Korean agent, here it is (click on it for a closer view):

I’m going to practice it until it’s automatic, since it would be nice to sign books with both English and Korean signatures while I’m there.

Theory & Praxis has even agreed to pay for a business class ticket (so that would be 14 hours WITHOUT my knees in my chin). And as a bonus, they invited me to bring my family. Hmm. Well, I adore my family. 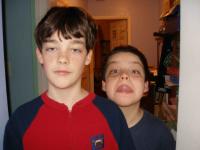 However, two fourteen-hour plane trips with all six of us and ten days in a country where I’m the only one who speaks even a tiny bit of the language….er, maybe not. (My husband, consulted, blanched when I said the phrase “Fourteen hours” and said, “I could stay home with the little ones.”)

So Christopher and Ben (16 and 14) are coming with me. What a great experience for them to have in their teens.

They, incidentally, will be flying coach. Do I feel guilty about this? Not in the slightest. I intend to park them in their economy-class seats with their peanuts and sashay my way back up to business class where my steak awaits me.

I am working on my Korean conversational skills with increased urgency, but I have a feeling that I will smile and point a lot. I was doing OK with the textbook exercises (“Go to the market and buy seven cucumbers and three cloves of ginger”), but the conventions of Korean conversation are SO complicated, and so unlike English conventions, that I’m quite sure I will say something enormously inappropriate. With any luck, my Korean hosts will have great tolerance for the awkward Americans.

Just to close, two entirely random bits of information. Here’s an interesting essay about why the SAT should be abolished. And is this company for real, or am I falling for some straight-faced prank?

Gulp.The raving writer
The Book of my EnemyThe spiritual toxicity of publishing