Looks like Bruce Nelson won the poll below in a landslide. Thanks.

Now for news from the annoying-details-of-production front. I have FINISHED, yes, finished, drawing all the maps, and have turned them over to the talented Sarah Park so that she can turn them into works of art (see my January 26th post below). Nancy is working on the permissions letters for all the text quotes (see February 21). So I have turned to the issue of the illustrations.

I had planned on including 36 illustrations–none of them huge glossy color pictures, since the text, not the photos, carries this history along–but each of them illuminating a certain point. For example, when I describe the wedge-shaped cuneiform of the Sumerians, wouldn’t it be nice to SEE a Sumerian tablet with wedge-shaped writing?

I have my own photos taken at the British Museum–here’s a Sumerian tablet: 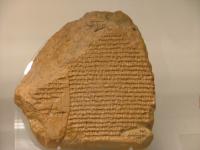 However, I can’t use my own photos. For one thing, they were taken through glass, so they’re a little fuzzy–fine for my own reference, but not great for reproduction. But the biggest issue is copyright. The British Museum owns the rights to images of any objects in their collection, so I can’t just reprint my own snapshots.

Out of my 36 illustrations, 32 are photos of historical objects (the bust of Nero, the mummy of Rameses II, an Assyrian picture of Jehu of Israel bringing tribute to the Assyrian king Shalmaneser). All of these objects are in different museums. The simplest way to get high-quality illustrations is to go through a commercial clearing house which takes high-quality photos and manages the rights. Here is a cuneiform tablet, courtesy of Corbis Images, one of the biggest and most widely-used clearing houses: 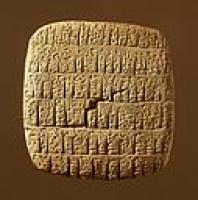 Yes, it’s a small image, because you have to buy the rights to reproduce the full-sized one. So I sent Corbis all the information about my own book (what territories it will be published in, copies in the first print run, cover price, whether the illustration will be less or more than a half page, etc.) and got a quote back.

But I really WANT the photos. OK, the Sumerian tablet may not be THAT exciting (although I always marvel that anyone can actually READ that stuff), but consider this: In my chapter on the Philistines I say that they were cultural magpies, taking bits of other peoples’ culture rather than creating their own. (So were the Romans, but they always come off better, somehow.) One example: The Philistines were part of an invasion of Egypt and, while down in the Delta, saw Egyptian writing and Egyptian sarcophagi. So they began to create their own Egyptian-style coffins. But because they were stealing someone else’s customs, the coffins are odd-looking. The features are out of proportion, and although there are Egyptian-style hieroglyphs painted on them, the hieroglyphs are meaningless gibberish–copies made by an artist who didn’t understand the original.

Here’s a coffin (my own British Museum photo): 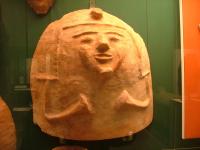 Now isn’t it nice to SEE that?

However, I can’t afford $525.00 per picture, so I’ve put in a call to Corbis to find out whether I can get a reduced rate (apparently they’ve got some sort of corporate arrangement with Norton). I’m contacting the museums directly to find out if there’s a cheaper way to do this. I’m searching around through other picture services. And hey, if anybody’s got a photo of the Midas Monument or a Shang bronze that you’d like to send along, let me know.

My next post will be from Chicago, where I’ll be speaking this weekend. If any of my readers are there, come up and say hi and I’ll put a picture on the blog.

Just in case any of you have friends-with-photos (like JFS below), here’s a list of the illustrations I’m looking for:

There, I have cast my bread upon the waters, and we’ll see whether any floats back (or whether it sinks, soggy, to the bottom).