I owe the blog an update on last week’s “52 Books” title (Andrew Ross’s The Celebration Chronicles) and I’ll get to it shortly…I keep finding other things to post about.

This morning, as I watched the snow fall (I only get to do that once every couple of years), I saw that Publisher’s Weekly had posted their February 28 issue online. It contains profiles of eleven fast-growing small publishers; Peace Hill Press, the small press I run along with my sister-in-law and brother, is sixth on their list. Here’s the chart (note how our employee-title/growth ratio compares to the others): 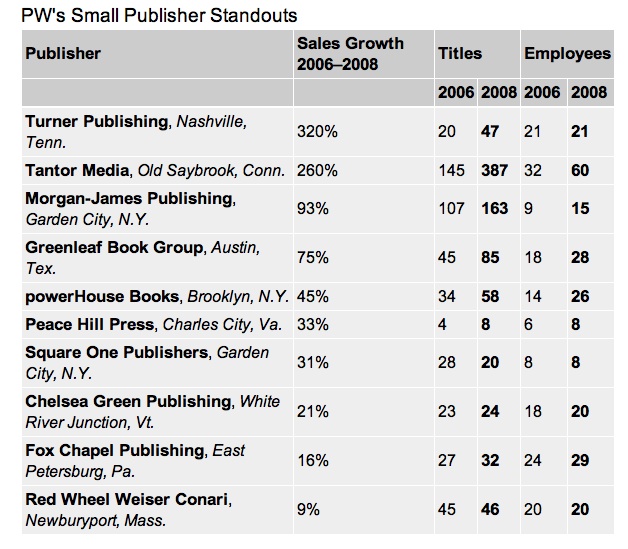 The full article, “Against All Odds, Small Presses Prosper” can be read on the PW website. Here’s the part of the story that’s about us:

Peace Hill Press, founded in 2001, is split between Virginia (editorial) and Seattle (business). The eight-person, family-run educational press has tapped an underserved group of customers: parents who are either home schooling or supplementing their child’s educationâ€”and who are doing so for academic rather than religious reasons. Vice-president Susan Wise Bauer says that increasingly, even home educators with deep religious convictions are turning away from the traditional, conservative Christian materials that have been home school standards, and are looking toward nonsectarian books aimed at home educationâ€”which Peace Hill publishes. And parents who teach one or two subjects at home after school are seeking these books out, too.

Peace Hill’s distribution through W.W. Norton (where Bauer and her mother published a book on classical home education in 1999) has been a boon to sales. Many of the publisher’s competitors sell only through specialty catalogues and Web sites, or through attendance at home school conferences, so the Norton deal gives Peace Hill increased visibility. Bauer says the home education and home tutoring markets are proving to be recession-resistant. The house’s 2008 bestsellers included four books that make up the Story of the World series, a chronological world history narrative, with each book increasing slightly in difficulty; and First Language Lessons, a beginning grammar and writing text.

I haven’t posted much here about Peace Hill Press, but I think I’ll create a new category; running the press gives me a whole new perspective on the publishing world, since I get to view it both as a Norton author and as a publisher, and I’d like to ruminate on that occasionally.