I am happy to report that Art Resource, a company that handles the licenses for thousands of different kinds of images, has given me a great deal on most of the illustrations I need. There’s only one set of pictures I can’t seem to get hold of–I wanted to include the portraits of several mummies discovered in the Royal Cache because the facial resemblances show so clearly that the royal line went from the family of Ahmose I to the family of Tuthmosis I: here’s Ahmose, Tuthmosis I, and his son Tuthmosis II

However, despite faxes to Egypt I haven’t heard back from the Cairo Museum, where the mummies are on display (I assume that the museum has the rights to the images).

Other than that, I’m just about done with the images. I had to buy most of them, but I was able to use one of my own–Hadrian’s Wall, a photo I took on a research trip to the U.K. It’s possible that the file is not going to be high-resolution enough for Norton, but I hope it is; I love this picture. 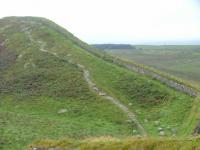 Meanwhile I’m fielding queries from the copyeditor, who is reading through the manuscript with an eye to correcting any inconsistencies. Norton, like most publishers now, outsources its copyediting, and mine has gone to a wonderfully detail-oriented freelancer in Maine. Every few days she sends me queries which reveal just how many creative spellings I have indulged in (hey, YOU try spelling Apennines the same way every time). Here’s a typical email:

1. Re the use of uppercase vs lowercase on geographical features: the author has indicated that “river” should always be lowercase, to agree with the maps; thus Nile river, Yellow river, etc.

Are the following usages OK? These are what I’m seeing in the text, but I’d appreciate it if the author could confirm that these are what she wants:

2. It would be great if I could clear up some of the discrepancies I am seeing:

4. I note that journal articles are cited differently in Works Cited and in the Notes. For example, here’s the same citation from a note and then from Works Cited:

Is this OK? Or should they be formatted the same in both places? If so, I’d suggest the top example simply because it’s more concise and I believe more commonly used.

Meanwhile I’m trying to prepare all of the final documents that need to go to production as soon as possible: the revised time lines that end each chapter (all 85 of them), a full list of credits for all of the photos, copy for the captions of all illustrations and maps, and what publishers call the “forematter”: list of previous publications, dedication, table of contents, and acknowledgments.

And in the middle of all THAT I’ve had to negotiate a deadline for the next volume. Everyone at Norton thinks that it would be better to keep the gap between volumes to two years, if possible.

Sure. Let me just rent my hut in Tibet now. I’m sure my husband won’t mind if I leave him to raise the kids alone for a year or so. 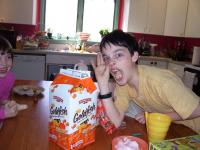 Children numbers one and three: 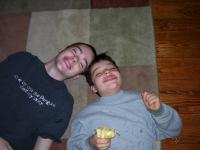 Will report on the end results of the negotiations shortly.