Having finished proofing the indexing to The Art of the Public Grovel, I settled myself in last week to an equally exciting task: writing up the revisions for the tenth anniversary edition of The Well-Trained Mind (due out in February 2009).

For those of you who don’t know, The Well-Trained Mind was the first book I did (my mother co-authored) for W. W. Norton, almost ten years ago now. The book first came out in 1999, and we revised it the first time for publication in 2004, five years later–by which point we’d had the chance to hear from, literally, thousands of readers. The first edition was based on our own experiences; for the second, we had the great advantage of knowing how our recommendations were working for a much larger cross-section of parents and kids. (Believe me when I say: We had no idea so many people would READ it.)

So the second edition had a fair number of changes in the text, because we’d discovered where we were unclear, where we needed to include alternative methods and programs for different kinds of learners, where we needed to simplify. And between 1999 and 2004, a lot of books and curricula we recommended went out of print, or changed prices–including some of the core texts that we had described in great detail.

This time around, I honestly didn’t think there would be as many changes. I’ve been collecting curricula for the last couple of years, looking for anything new and earth-shatteringly wonderful, but while I’ve added a few new books and programs this time around, most of our recommendations still stand. And I hired a friend to help look up all of the prices and publication information so that we could update the details. 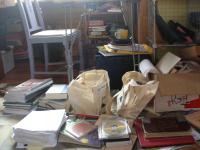 (One corner of my new-curricula pile. It’s threatening to spread and take over the third floor of the house.)

Despite that, the revision turned into a HUGE project. The big problem: Publishers let PERFECTLY GOOD BOOKS go out of print with astonishing regularity. Whole wonderful series of books that are only five or six years old, gorgeous art books that must have taken a FORTUNE to produce, science books that are well-written and clear–they all seem to fall off the backlist. And among the worst offenders are Usborne and Dorling Kindersley. I like Usborne books a lot, and I adore the DK reference books, but you just can’t rely on their titles staying around for any length of time. And this confuses me. After the first print run you’ve paid off most of your development costs; you’re just paying the physical cost of the book and the royalty to the author, and the rest is gravy. Why on earth let the books die?

Anyway, I ended up writing in an incredible number of changes, just because so many books are simply not available any more. And it was a long tiring process. In case you don’t know, a revision to an existing book is done–yes, in the year 2008–by HAND. Wherever there is a change, I am supposed to photocopy the page and write the change onto it in pencil. If the change is longer than a sentence, I type it out, indicate where it is suppose to go on the original page, attach a new page with the typed-out change to the original change, and then save the added text as a text file onto a CD. The result looks kind of like this (click for a close-up): 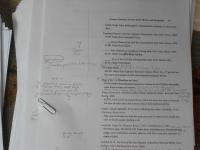 By the time I was done, I had a huge stack of photocopied pages with brief changes written on them in pencil, 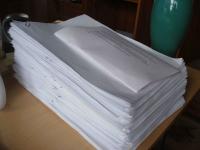 and I had typed out and saved 199 separate text files with changes of a sentence or more.

My HAND hurts. I don’t usually write that much in pencil any more. Seriously. I need to do some writing-muscle exercises so that computer use doesn’t atrophy my hands.

Anyway, I finally got the revisions done and out the door (here’s Mollie, my husband’s niece–she’s working for me this year–with the box, heading for UPS). 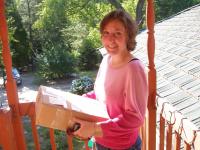 Time to get back to feudalism…I mean it, this time…