I spent the better part of a week rounding up contemporary chronicles that record this chunk of Welsh history, about the Welsh prince Llewellyn ap Gruffyd and his attempt to free Wales from the domination of the English king Edward I. But hey, the details make the story. 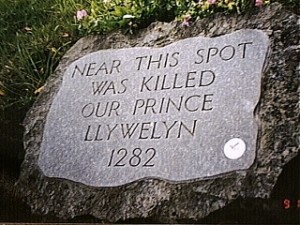 In November 1277, Llewellyn was forced to agree to a peace treaty, the Treaty of Conway, that took away from him everything but his original small northwest corner of Gwynedd. Edward I handed out Welsh lands to his barons in reward, took the Perfeddwlad for the crown, and gave Llewellyn’s younger brother Dafydd the rule over a chunk of the Gwynedd principality that had once belonged to the older sibling.

But in five years, this arrangement fell apart. The English barons, as overlords to their Welsh tenants, were both dismissive and demanding; the English sheriff appointed to supervise Welsh affairs, Reginald de Gray, was harsh, dragging up decade-old offenses for trial and threatening petitioners with the death penalty; Dafydd himself was forced to obey English law in his own lands. â€œAll Christians have laws and customs in their own lands,â€ complained one Welsh nobleman. â€œEven the Jews in England have laws among the English; we had our immutable laws and customs in our lands, until the English took them away.â€

Just before Easter 1282, Dafydd rallied the Welsh princes behind him. The first act of war was the sudden attack on an English-held castle, Hawarden, on the Saturday night before Palm Sunday. Within a week, Llewellyn had joined his brother (the English were now a greater threat than his siblingâ€™s ambitions), and almost the entire country was in revolt.

This time, Edward I brought more men. Fighting in the north of Wales, fighting in the south of Wales: in December, the balance was still tipping rapidly back and forth between the sides. But on December 11, Llewellyn was ambushed by a band of English soldiers at a bridge crossing over the River Irfron. â€œLlewelyn ap Gruffydd is dead,â€ wrote the commander of the ambush, in his report on the incident, â€œhis army defeated, and all the flower of his army dead.â€

In fact, Llewelyn had only a small detachment with him; but with Llewelynâ€™s fall, the Welsh resistance lost its heart. Dafydd immediately declared himself Llewellynâ€™s succesor as Prince of Wales and carried on the fight, but in June of 1283 he was turned over to the English by a handful of his own companions.

The war had been expensive and vexing, and Edward authorized a new punishment for Dafydd. He was drawn, hung, and quartered, a barbaric punishment carried out on a still-living rebel: dragged through the streets of London behind a horse, as a traitor; hung as a thief; and then cut down when still alive, disembowelled and his intestines burnt in front of his eyes, an ancient penalty for homicide. Finally, says the contemporary Chronicle of Lanercost, â€œhis limbs were cut into four parts as the penalty of a rebel, and exposed in four of the ceremonial places in England as a spectacle.â€ His right arm went to York, his left to Bristol, his right leg to Northampton, his left to Hereford. His head, bound in iron to keep it from falling apart as it decayed, was stuck on a spear shaft at the Tower of London.

Edward then took the title Prince of Wales for himself. The 1284 Statute of Rhuddlan formally added Wales to the English empire. Llewellyn became known as Llewellyn the Last; Wales would never again have an independent ruler.

I guess not; those decaying arms and legs must have put quite a few potential Welsh rebels off the idea of defying the English.