A couple of weeks ago I finished proofing and sent back to Norton the galleys for the third edition of The Well-Trained Mind. The last edition is nearly five years old, and in five years books and curricula change and go out of print, so we had to replace some of our previous recommendations.

This involved some rewriting, but I was happy to find out that I didn’t have to rewrite most of my chapter on logic-stage history, because our foundational resource, the Kingfisher History Encyclopedia, was still available. 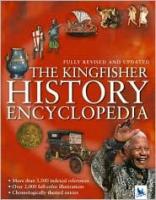 Well, in the two weeks since I checked, the book has gone OUT of print. Which means I need to replace it as a recommendation. Which doesn’t just involve replacing the name of the book where it occurs in the text–I have to choose new excerpts, do new sample outlines, and rewrite multiple other bits of text which make specific reference to page numbers, etc.

I sent off a panicked email (OK, maybe three or four emails) to my editor at Norton, who told me to calm down and take a nap. It appears that I have five whole days to pick a new outline and rewrite the chapter. Oh, and did I mention that it’s the last week of classes at William & Mary, which means I have to grade final projects by Friday? Oh, and that I had planned the next seven days to be an all-out assault on the last section of the History of the Medieval World, a last desperate attempt to finish it by my December 19 deadline????

I can probably do this (actually, what other choice do I have?), but I’m PEEVED. Let me give you some background on this. Ten years ago, when the first edition of The Well-Trained Mind came out, we recommended the Kingfisher Illustrated History of the World (an earlier version of this same text) as the central text for logic-stage history.

We quoted four chunks of text from the Illustrated History, so that we could demonstrate how students might outline them. Because the word count went over accepted free use standards, we wrote Kingfisher and asked for permission. They told us sure, we could quote from the book, and they would only charge us two thousand dollars for a permission fee. We complained and griped about this (“Don’t you understand that we’re telling people to BUY your book?”), but in the end we had to shell it out.

TWO WEEKS after The Well-Trained Mind came out, Kingfisher let the book go out of print, so that we had to spend the next five years telling people to use the replacement, a new edition of the book which was different enough so that the exact instructions we gave weren’t quite right.

And now here we are again. This seems like bad management to me. Why would you let such a popular book repeatedly go out of print?

I dug around a little to see what I could find out, and, lo and behold, Kingfisher is now owned by Houghton Mifflin. Which is not good news. Check out these recent news articles from Publisher’s Lunch, a daily update I subscribe to.

***UPDATE BEFORE YOU READ THE FOLLOWING***Someone from Houghton Mifflin just sent me an email saying that HM sold Kingfisher within the last year. In that case, can anyone explain to me why HM still has Kingfisher listed as one of their divisions on the webpage? And who now owns it? I’d go dig this info out for myself, but I have to stop digging long enough to rewrite the chapter which Kingfisher has just rendered obsolete. (In any case, it appears that the History Encyclopedia remained on the HM backlist, although I’d be very happy to find out that someone else controls the rights.)

It was less than a month ago that Houghton Mifflin Harcourt held an “open house” at their New York offices to celebrate the first combined list of the once separate trade lines, but now that welcome is firmly closed as the trade and reference division has “temporarily stopped acquiring manuscripts,” according to vp of communications Josef Blumenfeld.

As first reported by PW and followed by the WSJ and NYT, Blumenfeld struggled for metaphors to explain the policy: “We have a temporary freeze on. We are working on what we already have.” Or rather, “there is a freeze-lite” he said. “There is a way in so it is not a hard freeze but for right now, there is a temporary — call it a freeze if you want.” Or maybe they are keeping the pipes empty before they can freeze?: “We have turned off the spigot, but we have a very robust pipeline.”

Blumenfeld explains further: “The climate is difficult. It’s about cash outlays, and every outlay of cash in every industry is being scrutinized.” But is it about expenditures, or symbols? “In this case, it’s a symbol of doing things smarter; it’s not an indicator of the end of literature.”

They also suggest that the lite freeze on that spigot might leave room for a trickle, since, while saying they are not acquiring new projects, “there are still things being considered by the acquisition committee.” But now that it’s been made clear to agents they aren’t acquiring, there won’t be a lot of submissions coming in the door to consider. Which is the really scary part about saying out loud you aren’t acquiring.
*
Nov. 26: Parent Co. “Would Consider” Selling HMH Trade

With general bafflement continuing over Houghton Mifflin Harcourt’s willingness to admit out loud that they have a freeze on buying new books, the NYT speaks to Jeremy Dickens, president of Education Media and Publishing Group, the private equity company that owns the trade publisher. “He denied that the company was for sale, but said, ‘If there’s a transaction that makes sense for all of our stakeholders, we’ll consider it.'” And “he said that the company had received inquiries from other trade publishers interested in acquiring Houghton.”

On the freeze, Dickens said they wanted to be “extremely prudent about the way that we allocate our capital and where we make our investment decisions.” He added, “We have plenty of titles in the pipeline that will be coming out next year and we will continue to evaluate opportunities if and when we decide to lift the freeze.” That “if” will cause some additional concern….

The buyers took on massive debt to swallow Houghton Mifflin and then Harcourt, back when credit was at least cheap and freely available, and they now have “about $7 billion in debt” with annual debt service of “about $500 million.” DIckens says they have no problem covering the payments, but are not “allocating as much capital” to trade publishing, which is a small part of the company.

Meanwhile, yesterday agent Kristin Nelson, posting on her blog, said: “I did get a chance to talk to an Editorial Director at Houghton Mifflin Harcourt Children’s. She mentioned that the hold [on acquisitions] did not apply to the children’s division and that she had acquired something just yesterday.”

The article also paints a contrast between houses cutting back, like HMH, and publishers having strong years, like Hachette Book Group (where a string of hits is worth even more to the parent company now that the euro is somewhat weaker against the dollar.) And there is the suggestion that commercial hits are an essential part of success today: “One of Houghton Mifflin Harcourt’s best authors, Mr. Roth, is a literary lion who is frequently rumored to be on the short list for the Nobel Prize in Literature. Each of his last three novels have sold fewer than 75,000 copies in hardcover, according to Nielsen BookScan, which reports about 70 percent of sales. David Baldacci, meanwhile, a stalwart author in Grand Central’s stable, has already sold 114,000 hardcover copies of “Divine Justice,” his latest novel, just published this month.”
NYT

Separately, the Observer undertakes a comprehensive survey of cutbacks on lunchtime expenses in publishing. HarperCollins and Random House are eating less expensively. (At RH, “some supervisors were recently given guidelines indicating how much employees should tip and which restaurants near the company’s midtown headquarters are thrifty enough to do business in. While the guidelines were advisory, the message was clear.”)

But others, from Marjorie Braman to Bob Weil, cite opportunities hatched over meals. Esther Newberg at ICM is willing to “alternate” in picking up checks, and Ira Silverberg paid for lunch on Monday with an HMH editor who wanted to cancel after the company “slashed” T&E. Oops.
*
Dec. 1: HMH Officially Has No Idea What They Mean

Houghton Mifflin Harcourt’s botched public expression of their current acquisitions policy has reached comic levels. In the latest installment, vp of communications Josef Blumenfeld confirmed for the AP our report from an agent that the children’s trade division is still buying projects. Otto Penzler adds that the freeze was news to him, and says that a “high-level Houghton executive” told him he could continue to acquire for his line of mysteries. “‘Does this mean I can keep buying books?'” he asked. “‘Absolutely,’ I was told.”

Blumenfeld tries to persuade the AP that “talk of a freeze had been taken out of context.” But he’s the one who used the word “freeze” and said they had “temporarily stopped acquiring manuscripts.” And Jeremy Dickens, the president of parent company Education Media and Publishing Group, is the used the same term, and raised the notion that it might not be temporary: “We have plenty of titles in the pipeline that will be coming out next year and we will continue to evaluate opportunities if and when we decide to lift the freeze.”
*
Dec. 3: Saletan Quits Harcourt Houghton Mifflin

The situation at Harcourt Houghton Mifflin continues to worsen, as the AP reports that svp and publisher of adult trade Becky Saletan has resigned her position as of December 10. There was no further comment beyond confirmation from the company. Saletan (along with others at HMH) has been required to stay silent as the company has stumbled its way through explaining their partial “freeze” on acquisitions of books for adults.
*
Dec. 3: Dismantling of HMH Continues with Firings
Galleycat reports that Ann Patty says she has been “fired” along with “a lot” of other employees at Harcourt Houghton Mifflin, adding to the community’s sense that the parent company has simply given up on the trade line. As ever, the company is not commenting. Place your takeover bids now.
*

I don’t know what’s going on over at HMH (and neither, apparently, do they), but this suggests to me that I’d better not choose the last remaining Kingfisher history in print, the Concise Encyclopedia of History, to replace the out-of-print volume. 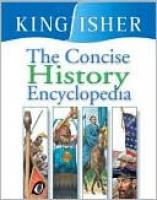 I’ll be looking for something else this week.

The RSA talk, onlinePublicity
William & Mary Book of the MonthPublicity