The Norton Fall-Winter 2007 catalog has arrived, with the History of the Ancient World included. (Norton publishes two catalogs a year, one called Spring-Summer for books published in April-August, and one called Fall-Winter for books published in September-March.) The catalog is primarily used by Norton’s sales reps, who go around selling books to the major bookstores and chains on the strength of the catalog descriptions and the promises Norton makes IN the catalog about promotion. So here is the catalog page: 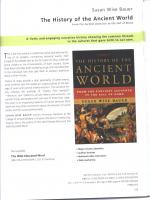 The promotional promises are down under the book cover. Let me decode just a little bit: “Major review attention” means that Norton will send pre-publication copies (“galleys”) out to the New York Times Book Review, Publishers Weekly, Library Journal, and so on. “Author lectures” means I’ll be giving talks about the book. “National radio interviews” means that they’ll hire an outside publicity company to book me into dozens of five-minute drive-time snippet-interviews on radio stations all over the country, and with any luck I’ll get to do a few longer NPR and talk show spots as well. I have no idea what a web promotion is, but I guess I’ll find out.

Now begins a very tricky phase in a writer’s year: the beginning of the Marketing Push.

In one sense, this can be a satisfying phase because (after all) you’ve done the hardest bit: no more sitting down in front of a blank screen, wrestling with fifteen contradictory sources and three languages in order to pull an interesting story out of obscurity. No more all-night writing sessions or desperate research journies or frantic attempts to trim unwieldy chapters down into streamlined prose. You can sit back and watch the book take on its published form.

But in another sense, this is a dreadful time.

While you’re writing, you can get up from the table and walk away with unmixed satisfaction, after a long session, because you’ve managed to do exactly what you set out to accomplish. (To quote Dorothy Sayers in Gaudy Night: it makes you feel a bit like God on the seventh day. Don’t take that the wrong way, please). But once the book leaves your hard drive and travels to the publisher, it’s no longer just you and your work. Satisfaction is no longer dependent simply on your diligent labor. Instead, you only feel satisfied when the publisher seems to be giving your book the proper importance.

Which has never happened, for me, even once, after the first book (the one for which I had no expectations at all).

By way of comparison, have a look at THIS page from the same Norton catalog, for a business book by Robyn Meredith called The Elephant and the Dragon:

I don’t know Ms. Meredith at all, and I’ve never read any of her stuff. However, a quick search shows me that this is her first book. And at once, the writer’s eye goes to…a photo! (Hey, I didn’t get a photo. Why not?) And then the all-important promotional stuff: Author tour? Norton’s paying for her to go on a tour? (Actually I’d rather shoot myself than go on a tour, but that’s not the point just now.) National radio AND television? A twenty-city “radio satellite tour”? (Which means she stays at home and talks on the phone, just like I’m going to do, so I’m not quite sure what the difference is, but it sounds more impressive.) Off-the-book-page features? (That means Norton’s publicity people will pitch newspapers and magazines to interview Ms. Meredith and feature her book in articles which are NOT book reviews, but rather lifestyles, news reports, etc.)

Now, there are plenty of gradations in promotion. I don’t expect to be treated like…oh, Edmund Wilson, who after all has won the Pulitzer not one but twice, and has been doing this for fifty years or so. You’ll notice, in HIS catalog page below, the two promises that show you’ve really hit the big time: Norton is doing “national print advertising,” meaning that they’ll take out ads in magazines and major newspapers, and there is “co-op available,” meaning that the publisher will pay B&N and other chain stores to give the book a place in the front of the store. (You didn’t think those books got stacked right on the front table because of sheer merit, did you?)

No, I don’t expect co-op money or print advertising (or not yet). But still…

My agent points out that for my books, the catalog page is not actually as important as it is for a first-time author. I already do have readers; I basically book my own author tours by doing all those educational conventions every year, so Norton doesn’t have to do it for me; and my books tend to sell steadily along, rather than having a huge burst and then tailing off; they sell like reference books rather than trade books, in other words, so what they do in the first three months isn’t diagnostic of their success the way it might be for more topical titles.

And this is the point at which I have to rein myself in, or go nuts. Comparison is the death of contentment. Worse than that, it’s the death of the creative impulse. You CANNOT write well whilst fretting about your catalog page. Just stop.

Easier said than done, of course. My father had a golfing buddy who briefly hit the big time and later told him, “The best times you’ll ever have are when you’re struggling on the way up.” Now I know what he means. As soon as you’ve had even a modest bit of success, you have Expectations. And Expectations will always, in the end, disappoint. Even when you’re reached the very top–and you’re Sebastian Junger, or Michael Lewis, with a TWO-page catalog spread and a twenty-city tour, you can always find yourself slipping backwards.

Or so I assume, but I’ll let you know when I’ve got a two-page spread and a twenty-city tour.