The index to The History of the Ancient World arrived yesterday, under the worst possible conditions.

Background: This pre-Christmas week was cheered by my unscheduled visit to the hospital. I won’t overindulge in details. Suffice it to say that the visit lasted three days and involved an undignified amount of throwing up. Neither will I name the hospital in question, but here it is in 1883. (Hey, it’s Virginia. Even the hospitals are historic.)

Apart from giving birth four times, I haven’t been an inpatient since 1992. Have there been sweeping changes in nursing practice that I’m not aware of? Apart from making sure that my pulse was still beating every four hours, the nursing staff pretty much allowed me to enjoy my solitude. Even when I didn’t want to.

Me: (hitting ‘call nurse’ button frantically, and repeating every twenty minutes until I get a response)
Cranky Voice: What do you WANT?
Me: I need to see a nurse.
Cranky Voice (suspiciously): Why?
Me (thinking that I’d just as soon not describe my various problems into an intercom): Can I just see a nurse?
Cranky Voice (clearly losing patience): Why do you need to SEE a nurse?
Me: I’m in PAIN.
(Long pause)
Cranky Voice (eventually): Well, all right.
(Wait of forty-eight minutes ensues)
Nurse (appearing in doorway): What’s the problem here?
Me: You told me to tell you if I was in pain. Well, I’m in PAIN.
Nurse: Honey, we can’t do anything about that.
Me: Can I have a Tylenol?
Nurse: Your doctor hasn’t ordered anything like that.
Me: Can you ask him?
Nurse: We don’t want to disturb him at 2 AM, do we?
Me (mentally screaming, YES, darn it): Well…can I have a cold cloth for my head?
Nurse (thoughtfully) : Hmm. Yes, that might help. Good idea.

SIGH. (Before I get a zillion indignant comments, I know that there are many dedicated and hardworking nurses who want to make their patients as comfortable as possible. Floor 5 of this particular hospital didn’t have any duty over the weekend, that’s all.)

Anyway, I staggered home Sunday evening, after three days of being sustained on nothing more than IV fluids and ice chips, to be welcomed into the island of sanity which is my home. 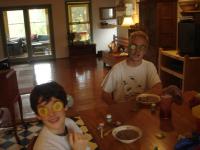 As any normal well-balanced person would do, I immediately checked my email. And there it was: a massive electronic file containing the newly-finished index, along with a note from my editor’s new assistant saying, ” Please look over and answer any indexer queries (such as different spelling of names that overlap–which one is correct?). Please also look through the entire document for any spelling errors or concept ideas that need to be changed. As everything here works on a fast schedule, please email, call or fax the changes to me by the end of the day on Dec 13th at the very latest.”

In other words, forty-eight hours to read and evaluate the whole thing, as well as answering a raft of scintillating queries such as:

(If you’re on codeine, it looks even MORE fascinating.)

Now, if you were raised female in the South, in a certain type of environment, you would rather DIE than give anyone a hard time. Your deepest fear is that people will think you’re Difficult. I mean, the closest thing to complaining I did at the hospital was to say meekly, “Are you sure the anti-nausea meds ordered four hours ago aren’t up here yet? Oh, okay, thank you so much. I’ll just keep on throwing up.” So I got ready to check the index.

My husband said, “What are you doing?”

I said, “Norton wants the index back in forty-eight hours.”

My husband said, “”Well, tell them they can’t have it.”

The skies opened and light shone down. I can DO that? I mean, what if they do think I’m high maintenance? It’s not like I socialize with the Norton folks on a regular basis. It doesn’t really matter if they like me, does it? Anyway, the book will still come out, right? And I AM high on codeine, right?

So I emailed back, “I’m just out of the hospital. I can probably get it back to you by Monday, but if that’s too late, it will have to go to press unchecked.”

And in five minutes, she answered: “Get better. Monday is fine.”

(SOUNDS OF LIFE-CHANGING ENLIGHTENMENT: GONGS, HEAVENLY CHORUSES, AND TRUMPETS. SOMETIMES I CAN JUST SAY NO.)

So I went to bed to recuperate, where my invalid hours were cheered by the regular appearance of Emily in a laundry basket, a.k.a. Scary Basket Monster.