Here’s Entry Two in my “Evolving Life of a Writer/Homeschool Parent” series. This takes place about a year and a half after Entry One…

A DAY IN THE LIFE
1999: a day with a first and third grader and a three-year-old

6:30 AM I meant to get up at 6, but I got to bed late last night and now I’m dragging. I drink a quick cup of coffee and go for the 3 1/2 mile walk I try to take at least four times a week. The boys don’t usually get up until 8 AM; if they wake up, they read in bed until I come to get them. Peter (my husband) has a breakfast meeting this morning and won’t be back in our home office until around 2. I ask my mother (who lives in an adjoining house here on the farm) to open the connecting door between our households and keep an ear out for screams.

7:50 I get back from my walk and decide I don’t have time to shower. Instead I do a load of dishes and go in to get the boys up. They’re all awake. Benjamin (six) wants to do school in bed this morning, so I get him a lap desk and serve his cereal and milk on it. Christopher (8) and Daniel (3) get up and dressed, and come into the kitchen for breakfast.

8:30 I’ve been shuttling between kitchen and bedroom for half an hour. I tell Ben that if he needs any more food, he’ll have to come into the kitchen to get it. Christopher’s finished eating (toast and scrambled eggs), but Daniel’s still working on his plate, so I start Christopher on his cursive penmanship (which he can do by himself) and get Ben’s books together.

8:45 Christopher finishes penmanship; Ben finishes breakfast; Daniel drops his plate. I give Christopher his grammar book, explain the rule in today’s assignment, and tell him to start the exercise. Then I wipe up the eggs and take Ben’s penmanship into his room. I still have to watch him do his writing, because he wants to do his circles backwards, so I stand beside the bed and say, “Up and around towards the wall! Up and around towards the wall!” while he writes. Daniel climbs up on the bed. Ben protests. Daniel yells. Christopher bellows from the kitchen that he’s done. I tell Christopher to be patient, Ben to be tolerant, and Daniel to stop grabbing Ben’s pencils.

9:05 I take Daniel into the kitchen with me to check Christopher’s grammar. He’s made two punctuation mistakes. I mark them and ask him to correct them and find me the rules that apply. Daniel asks for his markers, so I put him at the end of the table with his marker basket and a pile of scrap paper. When I get back to Ben’s room, he’s finished his penmanship and done all the remaining circles backwards. I make him write five more the correct way around.

9:15 Christopher’s ready to do his Writing Strands assignment. Today he has to do a Good Deed report, so I persuade Ben to get out of bed and bring his brother a little bowl of M&Ms. Christopher is supposed to write an account of this, but everyone now wants to eat M&M, so we have our snack break (way too early).

9:20 Daniel is covered with red M&M goo. That “Melt in your mouth, not in your hand” slogan is a LIE.

9:25 Daniel’s in the bathtub. I put Ben back in bed with his Spelling Workout book, explain what he has to do on the next two pages, and ask him if he can do it alone. He says he can. I go into the kitchen and ask Christopher to tell me what just happened. He says, “Ben brought me some M&Ms.” I say, “No, tell me exactly what happened from the beginning.” “Ben came in the room,” he says. “What next?” I ask. “He gave me M&Ms.” “Wait,” I say, “where did they come from?” “You gave them to him,” he says, looking at me as though I’m feeble-minded. “No,” I say, “you have to tell your reader that Ben was holding M&Ms in his hand, or else the reader won’t know where they came from.” “Ben had M&Ms in his hand,” Christopher says. Daniel yells, “I want my octopus.” I tell Christopher to think of a title for his story and write it at the top of his page. Then I find the octopus, check on Ben (who has actually DONE his work — I am astonished), tell Ben he’s wonderful and he can play Legos for a minute, and then go back to the kitchen. Christopher has written, “Ben Brought Me M&Ms” at the top of his paper. We talk through Ben’s “Good Deed” for a few more minutes, and then he begins to write the sentences down, one at a time. I start to make brownies — this morning, my father and grandfather and a couple of other men are outside running the sawmill, and we usually take them coffee and goodies around 10:30.

9:55 Christopher has written two sentences. “Isn’t that enough?” he asks. “No,” I say, “you need to finish the story.” I go in Ben’s room and listen to him read me a chapter out of “Owl Stays Home.” Daniel is pouring water on the floor, but since he’s out of everyone’s hair, I put down three towels and try to ignore it.

10:10 I start the coffee, and then call Ben out for a piano lesson. We work for about 15 minutes before his attention starts to flag.

10:25 Christopher brings me a nice paragraph-long story. I praise it and ask him if he’d like to see how to set it up as a newspaper story in Microsoft Publisher. He says he would, so we turn on the computer, open the program, and type “The Paper” as the title of the newsletter. He starts to type his story into one of the column (hunt and peck method). Ben puts on his boots and says he’s going to go tell the men that the snack is coming. Daniel appears in the living room, stark naked and dripping water. “The train got out of the tub,” he announces.

10:40 I finally get outside with the snack. Christopher wants to stay in and work on his newspaper story. Ben and Daniel and I eat brownies with the men and go for a little walk around the house. Both of them step in a puddle and get soaking wet.

11 AM When we go in, Christopher’s getting tired of typing. I show him how to save the program and tell him to practice his piano when he finishes. I put Ben and Daniel into dry clothes and go to take the wet ones down to the laundryroom. When I come back, they’re having a fight. I put Ben on his bed and have a talk with Daniel, and then sit Daniel on the sofa and go have a talk with Ben. “I can’t possibly practice with all this noise going on,” Christopher complains. “Tough,” I say.

11:15 It’s time for history. We’re reading about Michaelangelo today; I have a fairly difficult book with great pictures, and an easy book with not very good pictures. I read to them from the difficult book, paraphrasing when I can to make the text easier, and stopping to ask questions occasionally (to make sure they’re listening). Daniel climbs in and out of my lap the whole time. Ben thinks that having a saw that can cut stone is “cool.” He asks if he can draw a picture of it. I agree, and when we’re done reading he sits down to draw a picture of a stonecutter’s workshop. Christopher wants to write about the David. He’s a little overwhelmed by the statue’s….nakedness. We talk about Renaissance views of the body and of man’s greatness. When we’re done, he writes, “During the Renaissance, people painted pictures of naked people. They thought the body was beautiful. They also made statues of naked people.” I put this in his History Notebook. I write, “A Stonecutter’s Workshop” on Ben’s picture and put it in his History Notebook. Daniel falls down and bumps his head. I pick him up and carry him around (he weighs 35 pounds).

11:55 The boys go out to feed the rabbits. I look at the schedule. We alternate chemistry and history; today was a history day, so we’ll do chemistry tomorrow. Both boys have done their penmanship; Christopher did his grammar (he does spelling on alternate days), and Ben did his spelling (he’ll do spelling every day until he finishes Spelling Workout A and moves on to English for the Thoughtful Child); Christopher did his writing, and Ben his reading, and we all did history and piano practice. They’re supposed to do art today, but when I look outside they’re cleaning the bunny cage, so I don’t call them in. I sit down and read “Richard Scarry’s Word Book” to Daniel for the eighty-sixth time.

12:20 The boys come in covered with bunny hair. I make them both change (Christopher’s slightly allergic) and sit Christopher down to read a chapter in his current book (a biography of Paul Revere — it’s the wrong time period, but he listened to “Johnny Tremain” on tape and got interested, so I’m practicing flexibility). I make sandwiches while Ben and Daniel get into another fight. I make Ben sit on the sofa next to Daniel and read him a book, on the principle that good actions drive out bad behavior, but unfortunately Daniel head-butts him while he’s reading and they both start to cry. I sit Daniel in a chair at the table for another talking-to and send Ben in to play Legos. Christopher says, “I can’t possibly read with all this noise going on.” “Go in my room,” I say. He goes in my room and yells, “I can still hear them!” “Tough,” I say.

12:25 I talk to Daniel and then take him in to apologize to Ben. “I’m sorry, Ben,” Daniel says. Ben hugs him too hard. They both fall over and Daniel starts to cry again. I take Daniel (still howling) back to the kitchen and tell Ben to stay put until I get lunch on the table.

12:45 Lunch is finally on the table. Christopher has just finished his Paul Revere chapter. He goes and gets his Lego sub, and he and Ben have a big Lego battle in between bites.

1:05 Christopher and Ben wash their hands and get ready for quiet time on their beds. They have books on tape — Christopher is listening to the Redwall series, and Ben is listening to “The Mouse on the Motorcycle.” I put Daniel in his bed, read him another book, and turn on his tape recorder.

2 PM Peter gets home. The boys are still in bed. I have to go in to the university library this afternoon to work on a research project, so I put something in the crockpot and get bread on to rise. Peter will do Saxon math with both boys and read them a chapter out of their current literature book — a story about the Norman conquest. Christopher also has Latin vocabulary cards to drill. I leave around 3 PM, planning to be back about 6:30 for dinner. 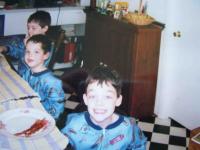